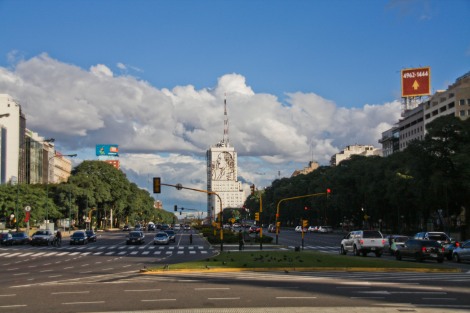 Above: a view of 9 de Julio — the main avenue that runs through Buenos Aires.In the background on the building is a portrait of Eva Peron.

Please forgive the non-creative title…words, even English ones, are difficult after a day of trying to decipher Argentine Spanish.

– a kiss on the cheek is a conventional greeting

– people form a line on the sidewalk (as opposed to an unorganized mass) when waiting for the city bus; although, this seems to be in an effort to keep the sidewalks clear, rather than maintain an order as to who gets on the bus first

– milk and yogurt comes in bags (like in Montreal!)

– pedestrians and cars alike usually obey the traffic lights (unlike in China — where cars will barely stop for people, who happily dodge the speeding vehicles — and unlike in some other Latin American countries, such as Nicaragua, where they have very few traffic lights or stop signs to begin with and driving is more or less a free for all), except for the occasional brave soul who dares to venture across a 16-line highway — one of the largest in the world — in the center of the city (yes, I saw this happen)

– the traffic lights go from green, to yellow, to red, to red AND yellow, then back to green

– when ordering vegetable pizza, one will find that the vegetables (spinach, I believe) are under the cheese

– Porteños (people who live in Buenos Aires) tend to only fill coffee cups half way up (or less) with coffee, even if you ask for  it without milk or sugar